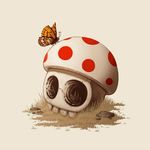 1 mo ago
Current Ring, ring... Ring, ring... This is the meat man speaking.
4 mos ago
I return... maybe...
1 like
1 yr ago
Is it murder if I eat them till they're dead?
1 like
2 yrs ago
So... I found some bones in my bag... no idea where they came from, but they tasted and looked like they came from some kind of chicken curry.
2 yrs ago
wHY hELLO mR bONES, i'M gOING tO dRESS yOU iN pEOPLE sKIN!
4 likes

In Goblin Quest → 26 days ago Forum: Casual Roleplay
Though both goblins lay prone by the body of the now-dead harvest sloth, they'd done it. Even so, between her sister getting hurt and the fear that lingered even after the fight, Aya couldn't feel good about their victory. What was more, the sisters were both paralysed, leaving them in a bad position to defend themselves against any further attacks.

As her mind began trying to think up solutions to the current predicament Aya was distracted by something else, a feeling of sorrow that placed itself into Aya's mind, even through all of Aya's own panicked thoughts. Maybe it was better to describe it an awareness of a feeling, rather than a feeling in its own, there was a sort of disconnect as though Aya were only a spectator to the feeling. It wasn't until she heard Ragi start sobbing and crying apologies that Aya realised what it was she was sensing wasn't a part of her own mind, but her sisters. Aya had wanted to say something to help ease her sister's pain, but whenever she tried to say something the words failed to come out, blocked by her doubts that she could do anything to help and a fear that whatever she said would only serve to make things worse.

It wasn't until Ragi's sobbing stopped and Aya felt her mind calm down a little several minutes later, that Aya was able to revise her mental image of her sister. Ragi was a genius no doubt, but she was still only a goblin, a brilliant and kind one, but a goblin nonetheless, yet somehow this revelation only caused her opinion of her sister to grow. Yes, Ragi could make mistakes and would do so as long as she continued to strive for the best possible outcomes, but if anyone could achieve those outcomes it was Ragi. The flaws Aya had noticed in Ragi's plan finally fell into place, the plan hadn't been flawless, but rather it had been the best possible plan they could hope for given the information Ragi had and the outcome she'd been trying to achieve. What kind of pressure that kind of responsibility must have put on her sister Aya couldn't begin to imagine.

Aya's thoughts were once again cut short by another feeling, this time coming from insider herself. Hunger. It was far worse now after the battle, having gone from little more than an ever-present annoyance to something actively painful, an issue only made worse by her noticing the problem. Feeling the harvest sloth beneath her body Aya vaguely recalled her worries about it potentially being poisonous, but between her hunger and the goblin instincts screaming at her to eat, Aya had hardly even begun that chain of thought before her teeth had sunk into the harvest sloths flesh. It took all of what little restraint she had left to leave her sister half of the sloth alone, and there certainly wouldn't be enough left to feed Bug and Twig as well.

Strangely enough, Aya had quickly begun to feel better after eating, the paralysation working its way out of her like a bad case of pins and needles at a noticeable rate. Was that an effect of eating the sloth? The moment she was well enough to stand she did so, grabbing her rock as she struggled to her feet and positioning herself to overlook her sleeping sister as she dropped back into thought. If she wanted to help her sister she'd need to have a plan.

After a while, Aya's attention was drawn to a rattling sound, though even so it took her a moment to spot the source, the snakes flower-like body haveing made it hard to spot in the grass and allowing it to have slithered a little to close for comfort. Aya gripped her rock, though thinking about it she doubted she could hit the snake. For whatever reason Aya found herself more confident in her tree-climbing ability than she had been at the start of the day, so maybe there was a plan there? No, Aya wasn't strong enough to carry Ragi and that would mean abandoning their prey. There wasn't time to devise a trap and beyond probably being hard to hit Aya didn't really have a clue what to expect from the creature. The combination of camouflage and a deterrent might suggest that the snake wouldn't attack prey that it couldn't ambush, but Aya wasn't prepared to take that gamble, especially not after the sloth. The snake rattled again, threatening the goblins, and Aya on instinct responded in kind, bearing her teeth at it and letting out a soft hissing sound as if to warn the creature not to approach.

A sudden awareness of Ragi's panic and fear suggested to Aya her sister had woken up, confirmed moments later by the sounds of her sister crawling backwards and calling for her. At least the paralysis had worn off. "It's okay, I'm over here sister. Maybe you should eat something? Um... just be careful there's another monster here...", Aya informed her sister, kicking herself as she realised that that last part probably wasn't the best thing to say to calm Ragi.

It was a bad position, Ragi was afraid, Aya was afraid, there was an immediate threat of unknown capabilities and Aya had no time to think things through. The goblin began to giggle slightly as she grinned wide, her outwards demeanour in stark contrast to how badly she was freaking out inside.

Battle Rock: (Held) A rock with about as much heft to it as it could have while still allowing Aya to swing it one-handed.
Goblin Garb: (Worn) A simple one-piece dress sized for a young goblin, it's made with only the most abysmal of craftsmanship and crappiest of cloth.
In Goblin Quest → 29 days ago Forum: Casual Roleplay
Acctually yeah that's a good point when you say no memories is it a no memories but contextless knowledge remains or is it just everything is gone in entirety? I, and I think most of us for that matter, was under the impression that our knowledge still remained, but our memories, while still there, were damaged to the point of being unable to paint a proper picture of our old lives beyond a few fractured details.

I don't think I've made too much mention to a past life beyond Aya recalling that she remembered having another name previously though not what that name was and a few references to things like the rope trap which she New of but not how to make, but if I was mistaken about the amount of knowledge we came in with I'm happy to retcon anything.
In Goblin Quest → 1 mo ago Forum: Casual Roleplay

@Dark Light Imagine combining that bait scent skill with the paralytic spore skill. Just thought of that one now.

I've been thinking both of these things!
In Goblin Quest → 1 mo ago Forum: Casual Roleplay

Are.. Are you telling Ragi and Aya to wear skimpy clothing?
Perv

Also, I know I joked about it before, but now I'm seriously starting to think that nudity may well end up being the solution to all your monster.
In Goblin Quest → 1 mo ago Forum: Casual Roleplay
Anyone got any guesses as to what some of the as of yet undiscovered monster skills might be?
In Goblin Quest → 1 mo ago Forum: Casual Roleplay
Same goes for Aya.
In Goblin Quest → 1 mo ago Forum: Casual Roleplay
Okay my best and only guess for how Ravi and Aya could potentially escape paralysis early is to eat the sloth and absorb its its abilities. The bestiary lists all three of the abilities as utility, two passives and an active, so a paralysis resistance is probably out of the picture, but there's a good chance the sloths spore cloud was its active ability in which case maybe absorbing that would confer immunity the attacks effect.

That said Aya's way to cautious to just eat a potentially poisonous creature under normal circumstances so unless she sees Ragi do it first or she's really hungry it looks like the sisters are in for bonding and hoping that nothing worse than a sloth comes by.