STATUS: fun fact: chainsawman made a cameo in the My Hero Academia manga, but due to copyright issues, he was nerfed to sawman in the anime. 9 hrs ago 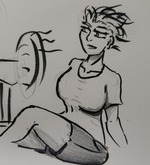 9 hrs ago
Current fun fact: chainsawman made a cameo in the My Hero Academia manga, but due to copyright issues, he was nerfed to sawman in the anime.
1 like
10 hrs ago
My boy been spending most his life living in a gangsters paradise
1 like
10 hrs ago
but would it be as good as the cringe to cringe all cringe
12 hrs ago
Mortis
3 likes
24 hrs ago
pizza time
1 like

I'm gonna fill this section to the brim with my self produced edgy quote things
Like seriously its useless info
-4;49 AM is best for edgy quotes and remembering regrettable life decisions
-Well made guacamole is bad for your waist line
-I keep typing waist waiste, is that common?
-Anime girls.
-It's not 4 am yet but good enough to add on to this unholy list
-Fresh avocado required
-What should I eat for dinner tomorrow?
-do you ever have mii theme stuck in your head at 3am
-you came all the way into my profile to read nothing but shower thoughts and immature comments. Interesting.
-I want more corn salad.
-ATLA is neat so far
-I like talking to myself in two barely different voices.
-ATLA is neat so far
-you know, I just realized this is more or less prime cringe material. But that's the exact reason this is going on.
-Mashed potato in sandwich is nice.
-So, ya like jazz?
-my sleep schedule is uncomfortably uncomfortable
-Mother of all omelettes
-omelletes?
-omelettes.
-Omelettes. I googled it.
-BURY THE LIGHT DEEP WITHIIIIIIIIIIIIIIIIIN
-CAST ASIDE THERE'S NO COOOOMIIIING HOOOOOME
-MAKING THE MOTHER OF ALL OMELETTES JACK, CAN'T FRET OVER AN EGG
-If you ever want to rp with me trust me you don't I watch anime and eat doritos but not with mountain dew but with milk
-trust me you don't wanna hit me up, I'd rather tell you my dubway sandwich combo, I wish they added marinara sauce to the choices here tho
-Chocolate chip cookies mmm
-Learning from mistakes is important. I keep learning it the hard ways. So make sure you do good when playing Dark Souls games.
-anime girls with big guns?
-mmmmm sugar glazed donuts
-like seriously, your fingers gonna get dugary but still, mmmmmm
-I dunno if milk goes well with it but its decently good, just less strong compared to the sugar
-just plain sugar glazdd is good, I dunno bout filled ones tho never tried much
-sugar glazed donuts, man I gotta work out to stay alive
-the hell is the INTP thing
-Beastars is fun but I'm not a furry
-I'mnotafurryI'mnotafurryI'mnotafurryI'mnotafurryI'mnotafurryI'mnotafurryI'mnotafurryI'mnotafurryI'mnotafurryI'mnotafurryI'mnotafurry
-sometimes I think, do I like pineapple pizza?
-Seriously though, Beastars is just so good
-Still not a furry
-IT'S JUST A SHOT AWAY!
-this IS a JoJo reference
-metal man metal me a metal
-but if we are here, then what about there?
-love does not conquer, what conquers would be violence eith the mask of love
-laugh but with sympathy, chocolate chip cookie but with milk
-become anime girl ride giant robots
-I swear if you post that lyric again I'm going to write a shitty rap
-I had a shrekless childhood, maybe watching it whennI was like 7 or something mighta changed something I guess
-old habits may die hard but that leaves me live hard
-they fly now?
-resident baby dragon doodler
-We Are ODST trailer is best way to get ODST hype in your veins
-Giving them back their memes
-Nutrition is a joke, calories are an illusion. Eat borgar
-having one of the bands I like get cancelled is an interesting experience
-I've seen dank be used for what it actually means recently, it felt new
-bonless ham
-you came here with your free will, you deal with the consequences now hahahhahahhahahhahhahah
-update after a long silence, I still am cringe.
-I want some sugar glazed waffles. Is that a thing?
-4 am thoughts are back baby
-losing weight means less sugar and I want sugar. Well not a oot. I got used to the chicken breast dinner gig. I'm not doing a hardcore diet anyway.
-float in thr most peculsirnnpickles i turned myself into a pickl
-THEN I WILL GIVE YOU THE REST OF ME THE REST OF ME THE REST OF MEEEEEEEE
-friendship with 4am thoufhts is over now is time for 5am thoughts
-We are at about over 3000 in terms of characters, that's quite an achievement
-who else is interested in pickles
-beans
-can of beans
-wake me up wake me up inside
-SAVEMEFROMTHE NOTHING I'VE BECOOOME
-I'm in the backrooms playing raid shad legs eith jason muffinson
-smetimes I wanna sing All Star at full voljme while eating potato salad
-majwkqqmqmwmww
-mosquito in myroom
-I said yep what a concept I could use a little fuel myself

Age: 45
Appearance: Mirage appears as a man wearing a dark brown long coat that reaches down to his ankles with exaggerated collars around his neck, with an ivory cowboy hat with wide brim. His face tends to be obscured due to a conveniently placed lighting or shadow, or mostly hidden by his hat and coat collar.
Personality:
Winsler, despite his shady appearance at first glance, is a communicative and friendly individual. Decades of separation from the world has made his mind far from an average human being, but with the help of PZPRS personnel providing him the necessary help he has gotten much better and maintains a healthy mindset compared to when he was first recruited by PZPRS.

Background:
His name and age has been confirmed by consulting the subject himself. Winsler claims that he had been roaming the world of reflections as his current self for 27 years. He made contact with PZPRS when he had been roaming for 15 years in mirrors, agreeing to work with the installation to keep the dangers of the world in check and preparing a countermeasure should he go rogue in some way. The Director of Many Things partook in the questioning.