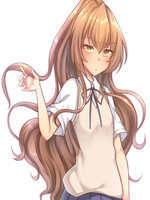 2 yrs ago
Current Don't I know who I am?
5 yrs ago
Perpetually Perfection Preincarnate
5 yrs ago
Ding dong the witch is dead
5 yrs ago
The witching hour
5 yrs ago
Overture Shockwaves

"Am I the only one who thinks just living is sad?" - "Velonica" - Aqua Timez

"Destiny can eat shit and die." - "In My World" - ROOKiEZ is PUNK'D
"There is a difference between owing someone one's life and owing them one's living." - Mio

"The exceptional is a mental trait. Bodies are easy to remake, skills simple to teach, techniques and powers can be instilled. But for one who values personal freedom above all else, brainwashing isn't an option. So finding those with the mind I want is the only variable." - Dark
"I guess I could grace you with the sexual prowess of a dragon.” - Kiha
"Do you know why people have two hands? It's so that they can hold a sword in one hand and sincerity in the other. Even if they fight with one hand, they can shake hands with the other and make up." - Kaori Takamine
"Everybody deals with grief differently, right? Some people fuck at funerals, I cut off heads." - Travis Touchdown

"See that? Now THAT was a battle! Look at this blood! We humans are alive, even if we are assassins! Doesn't matter if it's a video game, movie, drama, anime, manga, WE'RE ALIVE! People shed blood and die! This isn't a game! You can't just selfishly use death as your tool! THIS is Alice's blood! I bet you've already forgotten she'd existed! Same way you would've forgotten about me! And THAT'S why I'm tearing down the UAA!" - Travis Touchdown

"You are the crownless king, the one who got out. You reached the top and walked away." - Alice Twilight

"With you it's different! You're the No More Hero!" - Alice Twilight

"Ironic Question coming from an assassin! Did you honestly think you could take so many lives and never suffer retribution? Have you never even seen a Kung Fu Movie, spy flick or western? Shakespeare, for God's sake?" - Jasper Batt Jr.
"Remember, freedom of speech is a powerful tool. And when stupid people use power tools, they often get hurt." - TheMysteriousMrEnter (youtube)

Shion wasn't able to hear what Vermin Killer said, but luckily Ko was there and had rather large ears, the better to hear you with. She relayed his message to Shion. After thinking it over for a moment, Shion decided to walk out to wear he was standing. The army behind him was somewhat intimidating, but...

"Gods damnit. What do you want this time?"

Summer blinked several times in rapid succession. She was back on screen. Finally. And there was someone similar to her suddenly saying she wanted to wipe out the Mint? Summer had no quarrel with the Mint, but... They made monster girls. And that was both a good and bad thing. However, if there were never monster girls, she wouldn't have had to run away... Damnit! Stop! STOP STOPSTOPSTOPSTOPSTOPSTOPSTOPSTOP FUCKING INTERFERING! YOU CAN'T JUST BRUSH AWAY THINGS LIKE THAT!

Summer was beyond furious. She had no time to think about her past or the moral implications of something like that, she was pissed, and she needed an outlet.

There was a moment where she almost said something, but she couldn't quite find the words for it. Perhaps another time she could STOP. I've had enough of you for now. Go away.

@BrokenPromise
In Darkest Before the Dawn: A CYOA Magical Girl Roleplay → 2 mos ago Forum: Casual Roleplay
Much Earlier

"Is that so?" she looked around to see how messy the area was and that the very couch she was on had holes in it. "... Ko? Do you know what I'm thinking?"

"I think so, but how are we going to find a ghost here?"

"What? No. I'm thinking we should clean up a bit. You've got some cloth, thread, and needles in that bag of yours, right? You get started on the couch while I work on the rest."

With that said, Shion stood up and began clearing all the garbage she could find into a pile by the door while Ko began sewing colorful patches onto the couch, pushing springs back into place and even replacing a few in the process. Shion opened the fridge and began clearing any expired foodstuffs as well. They couldn't exactly install lighting or anything fancy, but the two were able to disinfect and clean all the surfaces, even the walls and ceiling, before they bagged up all the garbage and took it out when they left.


Summer arrived back in Penrose after her extended stay in the Beach Dimension with a notable tan and a much darker attitude. Her anger was palpable, literally visible from the steam rising from her head as she began towards and then past Beacon HQ into the middle of the city...
In Myriad Reality → 4 mos ago Forum: Free Roleplay

Ah, yes. That should be fairly easy to figure out, so we should go over the process for the wind release rasengan. Add wind nature to your rasengan so that the small gaps in chakra are filled with pressurized air, spinning the same as the chakra. It takes more concentration so practicing it is important to making it viable. Once you can do that you can learn a very, very powerful technique that builds on it.
In Myriad Reality → 4 mos ago Forum: Free Roleplay

*Nods*
Of course. I'll pay mind to that.

Where were we?
In Myriad Reality → 4 mos ago Forum: Free Roleplay

At some point I would like to, if that's alright.

Sure. It would be prudent then to practice your breathing while doing the other training, except where a different breathing technique is necessary.
In Myriad Reality → 4 mos ago Forum: Free Roleplay

Is there a way to test its effectiveness?

There is. I can hit you with some of the energies it'll help block against, once you've got chi flowing.
In Myriad Reality → 4 mos ago Forum: Free Roleplay

Yes, but I've never had a noticeable effect like a shield.

That's because it's less of an actual shield and more like a river of energy that sweeps up other energies within it, preventing them from hitting you.
In Myriad Reality → 4 mos ago Forum: Free Roleplay

Would you be willing to teach me that technique as well?

If you learned the proper breathing, it should happen naturally as you spend more time in that state. Didn't Cupid teach you that already?
In Myriad Reality → 4 mos ago Forum: Free Roleplay

It will naturally repel certain other types of spiritual energy. So by keeping a flow through your body, it will help defend against them.
In Myriad Reality → 4 mos ago Forum: Free Roleplay

How can I more effectively use chi in combat?