STATUS: Help Arknights wants so much AP 2 yrs ago 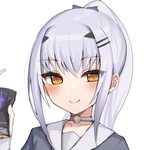 2 yrs ago
Current Help Arknights wants so much AP
2 yrs ago
I felt like I should update this
3 yrs ago
This was a good game.
4 yrs ago
Rejoice
4 yrs ago
Dapper old man, you weren't meant to be that good.

On the way to the bedroom, Tyaethe had somehow commandeered a sword off a guard. It was, in her opinion, rather on the small side, but just having it nearby ought to do in the event of anything happening... which seemed quite unlikely at this stage, and even then they'd have to get past Adeforth first. He might be old now, but that didn't make the man any less of a challenge to tackle with.

"I think I read the untranslated version," the vampire said absent-mindedly, looking at the rather more distraught younger princess and tilting her head in thought, "Given many of the hundi I've met, I'm not sure if it was actually a work of fiction to start with..."

Looking once more at the plush dragon, the vampire flopped aimlessly onto the floor, dress settling around her in a way that swamped the diminutive girl, the expensive fabric half sliding off her shoulders. Maletha was treated to a cheery grin from a paladin that now seemed younger than her, asking "So, does this dragon have a name? All the ones I've met have. They really like to make sure you know it if you're brave enough to find them."

And, in most cases, brave enough to fight them. Egos the size of mountains, the lot of them.

@VitaVitaAR[@@The Otter]@Psyker Landshark
In I Reincarnated into the World of an Otome Game, But———?! (Now Accepting) → 7 days ago Forum: Casual Roleplay
Elastasia

"N-No, nothing's the matter!" Elastasia squeaked, grateful for the distraction of... hmm, a whole bunch of furry creatures being released at once? Her memory of the game wasn't completely perfect, but she was sure this wasn't part of the usual course of events that had ever been covered... although, there were occasionally references to strange things happening off screen to establish the tone of the academy portion, so maybe this had happened, albeit never in detail.

The question was, what could she contribute? She'd just get in the way trying to catch them by hand, and magically snagging one at a time would be... well, difficult, and inefficient, and it wouldn't even help much as someone would still need to grab them.

Still, she had an idea! Sliding one hand into a well-hidden pocket, the white-haired noble pulled out a relatively simple wand--a basic focus, and not the best she had access, but definitely the best she felt comfortable carrying around for schoolwork... along with not being specialised for any particular task.

It was more than adequate for the task at hand, concentric circles of a deep blue appearing in the air ahead as she pointed, spinning counter to one another. Just a few seconds later, and two shimmering barriers appeared both behind the stampede... and directly ahead of them, ahead of those who had gone to help capture the creatures. Not the most solid of barriers, any serious attempt to break them would shatter the things like glass, but the pearlescent blue should hopefully deter any creatures from escaping further down the street. Especially as the two barriers steadily pushed closer and closer to the centre of the road, narrowing the space further... and pushing anyone who didn't notice insistently along.

Terys appeared to have joined the attempt with nothing but his hands, helpful as he ever was. All it seemed that he'd caught was a dire hamster.
In Blades of Iron Roses: An Anime-Inspired Knight RP → 11 days ago Forum: Casual Roleplay
Tyaethe

"I'll be staying with the princess, and the assassin," Tyaethe said, giving no explanation as to her choice. If pressed... well, they were planning to go into a mausoleum, which was hardly the roomiest place, and if she borrowed your everyday two-handed sword, it would only be a matter of time before she destroyed it on the walls. There simply wasn't time to trot all the way back home, pick up a sword impractically sized for a ball, and come back over here.

The rather less-stated reason was that she would have to try and find a change of clothes. This dress had been made and sized for her adult figure; it would just fall off if she were to go back to normal. That would be embarrassing, and 'hey can you find appropriate clothes for a page who's going to run off and get into a fight' would definitely take a while, even if they were here.

Besides, she wanted to know how this little assassin had managed to sneak in without being detected. Being a nem was one thing, but you still had to get through the doors, and a tiny hooded assassin rather stood out.
In I Reincarnated into the World of an Otome Game, But———?! (Now Accepting) → 15 days ago Forum: Casual Roleplay
Thank you for that.

It's like people posting entire sections of dialogue in dark blue; I shouldn't need to highlight it or zoom in to read from a comfortable distance...
In I Reincarnated into the World of an Otome Game, But———?! (Now Accepting) → 16 days ago Forum: Casual Roleplay
Can you please NOT make every mention of the word dark a dark purple. The entire site has a dark colour scheme!

Yes, full accessibility checks are probably overkill, but seriously, some contrast.
In I Reincarnated into the World of an Otome Game, But———?! (Now Accepting) → 16 days ago Forum: Casual Roleplay
Elastasia

"Oh, I think I see him! Come on," Elastasia said, seeing said flash of white hair... and promptly grabbing Reginald's hand without giving him a say in the matter. She could apologise later, but right now, the girl needed someone tall and intimidating to help make a path through the crowd rather than being walked into by everyone too busy talking to notice her shortness. Sometimes, all the white hair was a dead giveaway, but...

"If you'd just stayed put, I would have found your right away," she admonished, helping the younger boy to his feet, "I may miss a lot of things, but I'm still your sister, and I was going to show you around."

Of all the people he had managed to run into, it was quite interesting that Terys had found the tutorial shopkeeper--someone that she was intimately familiar with, needing to make sure that she'd not strayed onto some already-completed route by accident (or even cataloguing how easy it was to wind up on some of them through unexpected means). The other had been similarly a background NPC back when this was a game, identifiable as the maid of the man she had just tugged through the crowd...

Not that she was actually just a maid, Elastasia averting her eyes as if Mella would add mind-reading to her list of talents. Which probably looked like avoiding her for another reason, but then again she was quite pretty (and having a thing for taller women also didn't help, even if that amounted to 'most people').

"Of course, I'm sorry for doubting you, Elly," Terys managed, now standing at his full height... still shorter than the heroine, but nowhere near that short. He turned, giving an overly-deep bow to the maid and the shopkeeper given the rank differences, "I'm terribly sorry for running into you; I wasn't looking where I was going at all!"
In Blades of Iron Roses: An Anime-Inspired Knight RP → 19 days ago Forum: Casual Roleplay
Tyaethe

"I'm pretty sure the Velt Adventurers' Guild hasn't started taking assassination contracts," Tyaethe said, looking over the recovered items with some curiosity. One was a badge for the aforementioned guild--definitely not something that would usually be taking such contracts, and definitely not to take out royalty. Plus, if they had, she would have expected more than one nem assassin... no matter how sneaky she might end up being.

The other thing of interest was a note. "Oh, if she's carrying this, I'm pretty sure she's literate."

"'Fail and she dies'..." the paladin read out, tilting her head out of interest. Well, that was another wrinkle to it, it didn't look like their hired assassin was all that hired after all. Maybe if they could get her to write something, the handwriting could be compared? It would be a smart move to try and make it seem like you weren't responsible.

Oh good, he'd slowed down. Excellent, she'd been having to practically jog to keep up and that was undignified and ridiculous. Stupid long-legged giants in a rush, they really didn't appreciate how much of an advantage those legs were in turning a brisk pace into an active workout for everyone else...

Maybe the best accident would be one that took advantage of that? Some sort of magical pit trap; it could be claimed that he was just in too much of a hurry to notice the hole in the ground or something before he fell in, how unfortunate that it happened to be full of deadly venomous snakes. But then she'd need to find a way to acquire snakes on-demand, otherwise it would just be Reginald standing around in the bottom of a pit until someone came along with a ladder.

The fact that he had replied took her a few seconds to catch up on as she followed along, thinking. "Um... it's possible, but that doesn't really narrow it down, because I don't think he'd be at all familiar with anywhere I could be in the academy, and there's so many possible places that it would take days to search them..."

It was a big place, there were plenty of out-of-the-way corners to sit and read, after all.
In Blades of Iron Roses: An Anime-Inspired Knight RP → 22 days ago Forum: Casual Roleplay
Tyaethe

"Well, I was sure someone was going to suggest torture, or get pointlessly violent," Tyaethe answered, reaching up to tap Sergio's arm as an example, "So I thought that tickling would be the easiest way to tell if she was going to respond. You don't do any harm you have to fix, it doesn't make it impossible to respond, and you get to see if they respond to physical sensation. Plus, I've met way more people who can ignore any amount of pain but will flinch at being tickled."

And it was kind of fun.

Of course, the revealed neck made it clear that shouting and demanding questions wasn't going to work. Hm, was this going to become a game of charades, or was their would-be assassin literate? The damage might be healable, but from everything she knew about healing magic (not that it was a huge amount, since it wasn't something a vampire really needed), fixing an old injury like that would be a laborious process if it was doable at all. Not great for getting an answer now.

Hm, some random noble was still standing by the captain. He'd been trying to say... oh, something about tongues or checking for teeth, which wasn't entirely a bad idea until this point, but he really wasn't necessary or contributing. "If you're going to stand around, you might as well bring the drinks over. No point letting the party food go to waste."