Anyone wanna rp with a lonely young adult?

19203 posts
in 1434 days
Seen 5 hrs ago
Bio 1 day ago
Hello! I'm just a bored RPer without much to do, so I RP my time away, and I've found I enjoy it. I'm always open to new ideas, but I prefer monsters, arcane, and the like. I do enjoy ERP. And I'm kinda kinky, so sue me if I seem weird. If that's not your style, I'll try to avoid the smuttier side of a RP. There's only a few things I'm not willing to do, namely any kind of toilet stuff. I just don't get it, ew. Anything else I'm cool with, blood, horror, ect. I'm a Casual to High Casual Rper, though the longer the post, the longer it takes me to write it. I try to at least match what I'm given. I look forward to playing with you all! I'm open to pretty much anything. I prefer worlds with some magic, it's just who I am. I have to live in a world without it, is it a crime my fake worlds have some mystical properties? I can play without it, but I like the arcane. I can play any combination, (i.e. MxF, MxM, FxF, FuxM, FuxF, FuxFu) I can play multiple characters at once if you like.

My Craves atm
Fantasy/Medieval/Ancient
Modern/magic
Modern
Possibly Sci fi, I'm pretty inexperienced in it.
Kinks: Anything but toilet stuff. Really. Anything.
12x Like 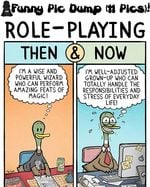 Member Seen 2 yrs ago
The Prototype

Member Seen 2 yrs ago
The Prototype

2987 posts
in 3086 days
Seen 6 hrs ago
@Shadow Dragon
If you're still looking for partners I'm trying to find something low stress.

Did you have anything in mind already?
↑ Top